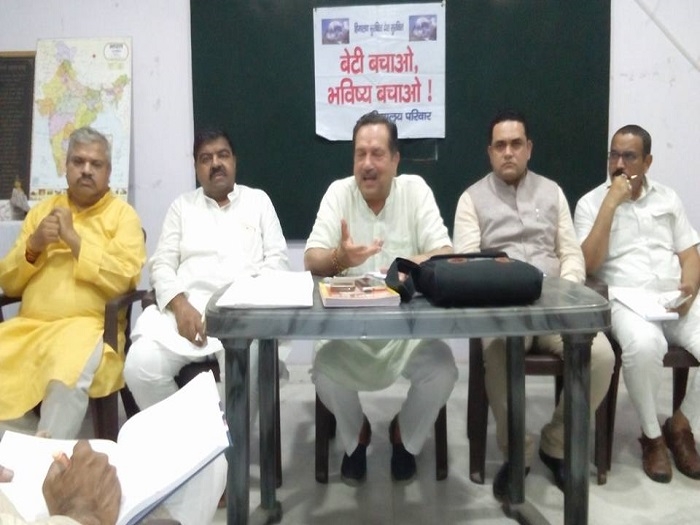 The decision to launch a national stir on this sensitive issue was taken at the meeting of the top office-bearers of MRM held in Delhi on July 21 in presence of MRM Patron Indresh Kumar and all the five National Conveners.

Briefing the meeting Indresh Kumar said that PoK has never been a part of Pakistan. It has been the integral part of India but Pakistan had forcibly occupied it since 1948. We should liberate that part of our motherland from the illegal occupation of Pakistan.

He said that even today, 24 seats in the J & K Vidhan Sabha and six seats in Vidhan Parisahd are lying vacant since3 past 70 years, which otherwise would have represented the people of PoK. The MRM would, therefore, urge upon the J & K government to fill up these vacant seats either by conducting elections there or by nominating the representatives of the people of PoK who still consider them as ‘Hindustani’.

The movement to highlight the issue of human right violation in PoK would be formally launched on August 9 in the Kashmir Valley. The objective of the movement is to “raise voice against Pakistan asking them to vacate the PoK”, Indresh Kumar said adding “if this takes place then it will herald a major change in Kashmir”.

Pakistan had divided the PoK into two separate entities namely ‘Azad Kashmir’ and ‘Gilgit-Baltistan’ in 1949. But the PoK was not merged with Pakistan nor did it hold any elections in that part in the past 70 years.

The MRM would also organise protest meetings, rallies, seminars etc. in each state capital on August 14 to highlight the human right violation in PoK allegedly inflicted by the Pakistani security men on the people of that region.

Besides, the people of Kashmir Valley and Kashmiri students studying in Delhi-NCR and other parts of India would join the MRM in its agitation.

It may be mentioned that people of PoK have started raising their voices against Pakistan's atrocities and terrorism acts after Prime Minister Narendra Modi had in his address from the ramparts of the Red Fort on Independence day had mentioned about the atrocities the PoK people are subjected to by the Pakistani security men.

It may be recalled that the External Affairs Minister Sushma Swaraj had recently simplified the visa regulations for the PoK people visiting India stressing the fact that PoK was Indian Territory under forced occupation of Pakistan.

MRM National Convener Dr Shahd AKhtar said that MRM activists would organise country-wide protest on August 14 in all the state capitals and major cities. He said that the MRM would urge the government of J & K to conduct elections in Pok and fill these vacant seats in the State Assembly and the Council. In addition, the Government of India should initiate process to recognize the democratic rights of the people of PoK at par with Indian citizens, he said.

Briefing media after the meeting MRM National Convener Mohammad Afzal and Organising Convener Girish Juyal said that the MRM had expressed concern over the demand for a separate state flag by Karnataka. The MRM believed that India is one nation and as such should have one national flag only.

Afzal said that the MRM has been of the view that stones, bullets, bombs and separate flag are not in the interest of the nation. He appealed to the Kashmiri people to give up these violent means and join the mainstream of nation as these are the enemies of Kashmiris and Kashmiriyat. (“पत्थर, गोली, बम और पाकिस्तानी झन्डा यह कश्मीर और कश्मीरियत के दुश्मन हैं, इनको छोडो और देश की मुख्यधारा में आ जाओ”.)

The meeting also discussed the ‘Go-Raksha Padayatra’ undertaken from MRM Cow Cell Convener Mohamamd Faiz Khan from Leh to Kanyakumari. The yatra began on June 24 from Leh and covered a distance of 500 km, the meeting was informed.

Besides, the meeting also decided to participate in boycott Chinese goods campaign and appealed to the government and the Supreme Court to take a decision at the earliest on ending the inhuman, anti-democratic and unjust practice of triple talaq to restore the honour of countless Muslim women.