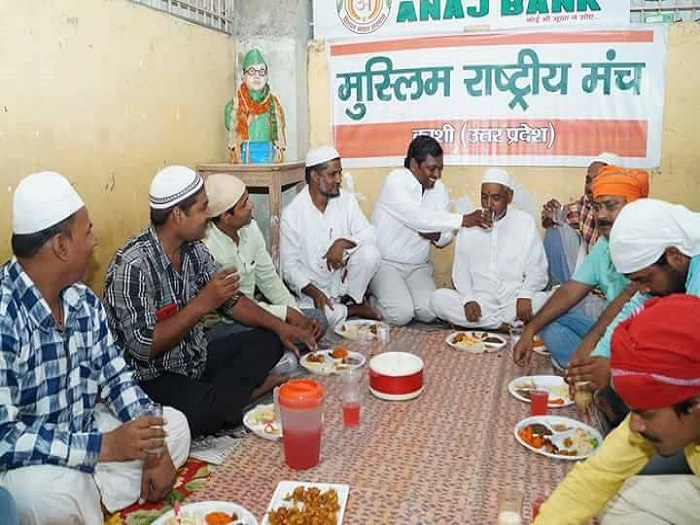 Bhopal/Varanasi/New Delhi, June 1: While the entire country is enraged over killing of an ox in Kerala by some over zealot Youth Congress activists opposing the Union Government’s decision to ban sale of animals for slaughter houses, the Muslims Rashtriya Manch (MRM) is celebrating the Ramjan with Cow Milk Parties.

At the time when the atmosphere in the country is being vitiated in the name of “Beef Parties” and by vulgar propagation of beef consuming, the MRM’s move to counter it “Cow Milk Parties” is commendable and appreciated by every peace loving citizen of India.

With the beginning of the Holy month of Ramjan, the MRM has decided to break the Roja with cow milk. Reports of such cow milk parties are pouring in from various parts of the country.

Recently, MRM National Co-Convener and senior leader S K Muddin participated in one such program. Distributing cow milk after the Roaj Iftar program, he said that this is in response to killing of cow in Kerala.

Muddin said that they served cow milk to fasting Muslims in Betul and Jabalpur districts in the last two days and the response they got was “highly encouraging”. He said cow milk is being served to Muslims after Roza Iftars. “We have plans to serve milk in each district of Madhya Pradesh during the Ramzan,” he added.

He said that the cow milk and ghee are good for health while beef is considered as bad for health. He said that cow is also revered by millions of our Hindu brethren hence it becomes our duty to honour their sentiments and refrain from killing cow. We may have different ways of worshipping but our culture is one, he added.

Muddin said cow milk has multiple benefits over beef whose "unhealthy and harmful" effects of were "endorsed" even by Muslim scriptures.

MRM is also serving cow milk to the fasting Muslims in Uttar Pradesh, he said. “Our initiative to serve cow milk is getting a good response from among the Muslims who are observing fast during Ramzan,” he told reporters. Cow milk digests easily and that is why it is given to the infants too, he said. “But cow meat is very unhealthy and harmful to the body. The Hadith (sayings of Prophet Muhammad) too says cow meat is very unhealthy and harmful,” he contended.

MRM ‘Gau-Prakoshth’ state convener Shariq Khan said that our country stands for brotherhood and peace. We must respect each other’s faith and honour sentiments, he added.

MRM conducts cow milk party at Varanasi: “Time has come to stop killing of cow and its progeny by taking strong and meaningful steps. It is most unfortunate that the Asia's biggest slaughter house is located at Mumbai and not in any other country. We will not allow a cow to be cut nor permit anyone to kill the cow, said Dr Irfan Ahmad, Kahi Prant Convener of Muslim Rashtriya Manch (MRM).

Dr Ahmad was speaking at a meeting held by MRM at Varuna Nagara, Hukulganj on Wednesday. He said that Kashi has always presented the “Ganga-Jamani” culture and there is no dispute on the issue of cow slaughter.

Dr Rajiv Shrivastava, National Convener of MRM ‘Seva Prakoshth’, presided over the function. He said that we have a responsibility towards Mother Cow and we need to reiterate our commitment towards it.

Indresh Kumar’s Ramjan message: Patron and guide of MRM Indresh Kumar has in his Ramjan Message appealed to the Muslims to adopt a boy or a girl and educate him or her. He also appealed them to plant a tree at a Dargah, Mosque, Madarsa or Kabarstan to save the environment and take the heavenly plant of ‘Rehan’ i.e.’Tulsi’ in common Indian parlance to their homes so that it purifies the homely atmosphere.

He also quoted the Hadith by the Prophet that endorsed the health value of cow milk and ghee and said that the beef was a health hazard and asked the Muslims to refrain from consuming beef.

Indresh Kumar also appealed the Muslims to honour the women as Islam says that heaven lies at the feet of the mother. We should stop insulting the women by triple talaq, halala, polygamy and more children, he said. Honouring women is a heavenly act, he added.

He said that Indian Muslims do not trace their ancestry at Gazni, Babur, Aurangzeb and do not inherit their legacy of hatred. They were the invaders and did not belong here, he added. The true ancestors of Indian Muslims are Bahadur Shah Jafar, Begum Hazrat Mahal, revolutionary Shaheed Ashfaq Ullah Khan, former President APJ Abdul Kalam and so on. Each and every Muslaman in India was a Hindustani, is a Hindustani and will be a Hindustani, he added.