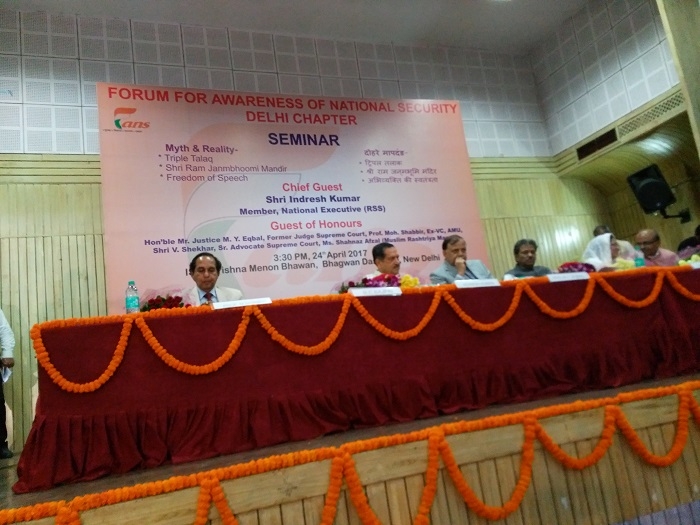 New Delhi, Apr 25: Member of RSS National Executive and Patron of Muslim Rashtriya Manch (MRM) Indresh Kumar Monday claimed that Muslims in India would not accept a mosque named after any individual as it was against the Islamic tenets.

Addressing a seminar on Myths and Realities of Triple Talaq, Ramjanmabhoomi and Freedom of Speech organised by the Forum for Awareness of National Security (FANS) here on Monday. The seminar was addressed by Justice M Y Eqbal, Prof Md Shabbir and Shahnaz Afzal among others.

Indresh Kumar said that Muslims themselves do not want a mosque to be built on the land where the Babri Masjid stood before its demolition in 1992, as it will be “unholy” and “against Islam”.

Advocating that construction of Ram Temple at Ayodhya was in the national interest, Indresh Kumar said, “Muslims will never accept such a mosque which is in the name of a person. All those who believe in Islam say such a mosque is unholy (napak) and we will never accept it,” Kumar, who is the patron of RSS affiliate ‘Muslim Rashtriya Manch’, told a seminar on ‘Myth and Realities on Triple Talaq, Ram Janmabhoomi and Freedom of Speech'.

The mosque was named after Mughal emperor Babur and was built after demolishing a holy place (temple) belonging to another religion, he claimed.

“The mosque was named after Babur. So, according to Islam, it is immoral, illegal, unconstitutional, and against Islam. Even namaz was not offered there,” he said.

He was supported by senior BJP leader Dr Subramaniam Swamy who, according to a report published in ‘Jagarana’ newspaper said that Muslims do not want mosque at the disputed site.

Kumar, seeking to strike a chord with Muslims said, “Khuda is Ram and Ram is Khuda”.

He said all should help build a Ram temple there as “it will be in the nation’s interest and important for its secular fabric.” 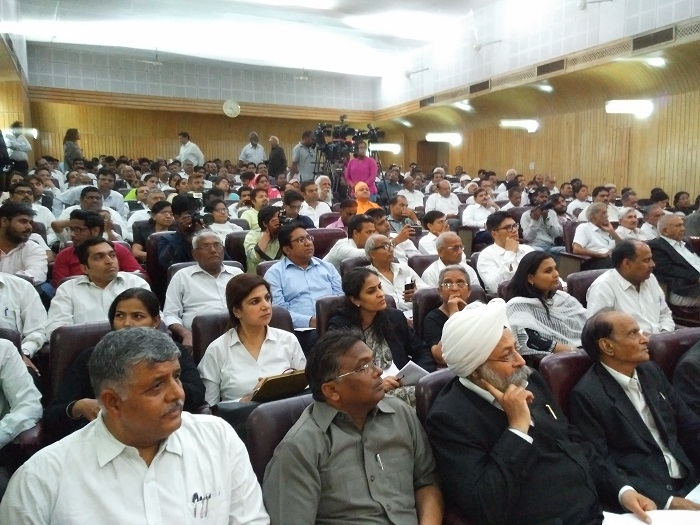 Claiming that a “revolution” has started for the construction of Ram temple, Kumar said all those who support peace, harmony, truth, and are nationalists, will favour such a shrine at the disputed site in Ayodhya.

He said that no compromise could be made with time, history and truth. This issue is sure to be resolved and no one can prevent its logical resolution. Now some Muslim organisations are coming forward for the construction of Ram Temple. The temple will be built one day and the entire country would be witness to this great achievement. There can be no compromise with humanity and nation at any cost.

The Ram temple issue had resurfaced in a significant way just ahead of the assembly election in Uttar Pradesh, after lying dormant for quite some time due to the BJP’s compulsion of running a coalition. After the party won a majority on its own in the 2014 Lok Sabha polls, several leaders, including ministers, started making noises about construction of Ram temple.

It was back in news recently when the Supreme Court resurrected criminal conspiracy charge against BJP veterans L K Advani, M M Joshi and Uma Bharti in the Babri mosque demolition case.

Indresh Kumar further said that we believe in freedom of speech but this should not exceed the legal and constitutional limits. People have freedom in India but not to indulge in beating, violence, or making wrong statements. Solution to every problem could be found out through dialogue. But we are not ready to understand and to be understood.

Stating that spreading fundamentalism in the name of freedom of speech was crime and not to oppose such elements was criminal act. The incidents happened in the JNU, Hyderabad University and DU were anti-democracy, anti-secular and anti-national and cannot be accepted or justified, he added.