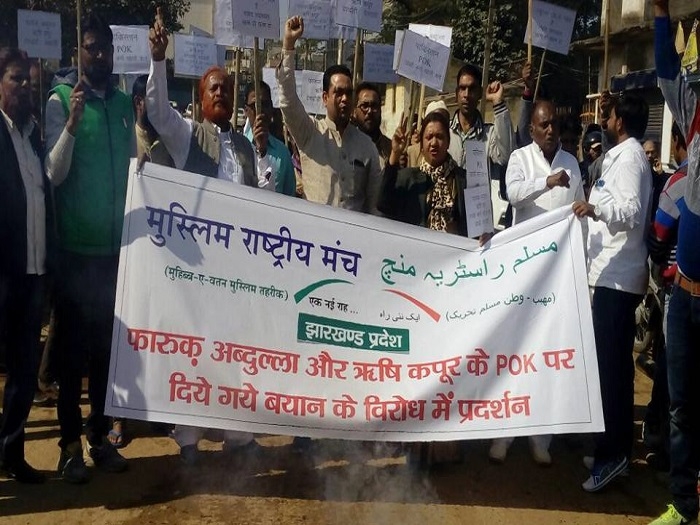 On another occasion he challenged to unfurl the national tricolour in the Lal Chowk of Srinagar than talking of retrieving the Indian Territory forcibly occupied by Pakistan.

Both the statements are in contravention to the unanimous resolution passed by the Parliament of India in 1994 which reiterated that “whole of Jammu and Kashmir is integral part of India and we will ensure that Pakistan vacates every inch of PoK.”

This is the commitment of the Parliament and Farooq Abdullah as its member betrayed this commitment and the trust of the people by giving such “Pro-Pakistan” statements.

Muslim Rashtriya Manch had been championing the cause of Jammu and Kashmir under the campaign called ‘Hum Hindustani – Jammu & Kashmir Hindustan Ka” since 2010, and decided to expose the anti-national attitude of former J & K Chief Minister Farooq Abdullah whose National Conference had been ousted from the power in the state.

The Delhi unit of MRM organised the protest at as many as 13 places under the leadership of MRM National Convener Mohd Afzal, Delhi Convener Yasir Jilani and others. They shouted slogans against Farooq Abdullah and burned his effigy along with that of actor Rishi Kapoor.

At a program organised at Nagina the effigies of Farooq Abdullah and Rishi Kapoor were burnt under the leadership of National Convener of MRM Youth Cell and Chairman of Mewat Development Authority, Khurshid Rajaka.

Addressing the gathering on the occasion he said that Farooq’s statement was anti-national and demanded that he should be tried for treason. He also said that the vacant seats for PoK in the J & K Assembly should be filled immediately either by election or by nomination. 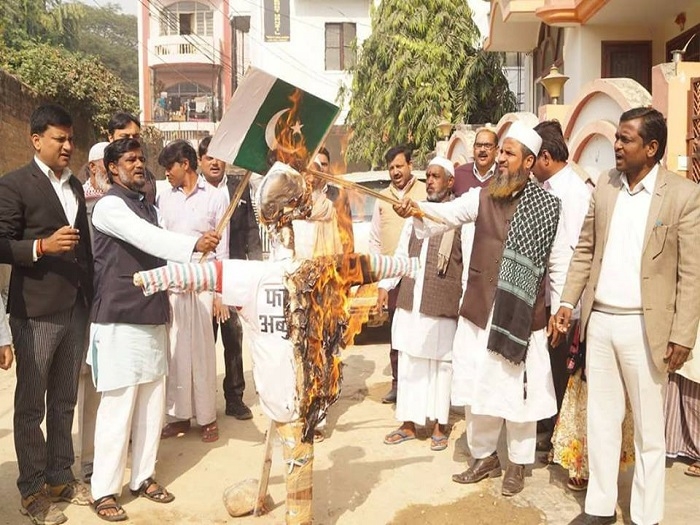 At a program at Saifai in Uttar Pradesh the members of MRM and Anjuman Farjandane Hind gathered to register their protest. They burned the effigies of Farooq Abdullah and Rishi Kapoor under the leadership of Asif Pasha.

Deploring their anti-national statements they demanded that both should seek unconditional apology of the nation and leave the country.

At another program held at Varanasi by MRM Sewa Cell, the MRM activists deplored the statements of Farooq Abdulla and Rishi Kapoor.

Addressing the gathering on this occasion Dr Rajiv Shrivastava National Convener of MRM Sewa Cell, said that Pakistan must vacate the PoK or else face disintegration. He said that people of PoK have become restive and want to throw away the burden of Pakistan’s tyranny. Pakistan will have to give up its claim on PoK or it will be further partitioned in six regions, he said.

MRM Kashi Prant Convener Dr Irfan Ahmed Shamsi said that Farooq Abdullah real face stands exposed with the statement he issued in support of Pakistan. He should seek Pakistani citizenship and migrate to that country.

MRM Jharkhand State Convener Afsar Qureshi said that both of them committed treason and treachery by giving pro-Pakistan statements. We will not tolerate this.

Dr Shahid Akhtasr said that Farooq Abdullah had shown his true colours by issuing this statement. Such people have no right to stay in the country. MRM condemns them in the strongest words. He said that on 22nd Feb 1994 the Parliament of India had resolved to take back every inch of Pok forcibly occupied by the Pakistanis. The statement of Farooq Abdullah is insult to this unanimous resolution of the Parliament of which he is a member.

The program was also held at Dingarpur in Moradabad district of Uttar Pradesh under the leadership of Shah Alam of Anjuman Farjandane Hind. Hundreds of activists raised slogans and burned the effigies of Farooq Abdullah and Rishi Kapoor.

UP BJP leader Ram Awatar Singla said that the time has come to end the terrorism amd urged the government of India to take stern steps to control people like Farooq Abdullah.