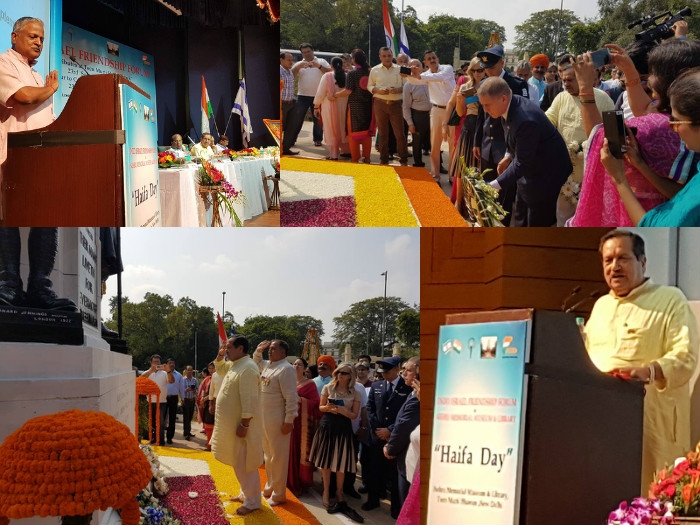 New Delhi, Sept 24: Addressing a gathering at a program organised to commemorate the anniversary of battle for Haifa and sacrifice of Indian soldiers there, Indresh Kumar, member of RSS national executive committee demanded that all the facilities given to the separatist leaders in Kashmir must be withdrawn forthwith against the background of recent happenings in the Valley.

The dignitaries paid tributes to the soldiers who sacrificed their lives in freeing Haifa in Israel. In his address, Indresh Kumar appealed to the government to take every possible step to reunite PoK which was forcibly occupied by Pakistan and help restore peace in Sindh, Balochistan.

He alleged that Pakistan was violating the human rights of the people of Sindh and Balochistan and trying to destabilise the situation in Kashmir. We must give a befitting reply to Pakistan for its nefarious activities, he said.

This program marked the anniversary of the victory of Haifa in Israel in which Indian soldiers played a very significant role. The Teen Murti Chowk in the national capital is built as a symbol of this Haifa victory. The dignitaries offered floral tributes to the memory of the soldiers at the memorial at Teen Murty Chowk.

Indresh Kumar suggested that the Chowk be renamed as Trimurthi Haifa Mukti Chowk to commemorate the memories of the soldiers and to further cement the ties between India and Israel.

Indresh Kumar said that Pakistan is a ‘country of mistakes’ and if it insists on plebiscite in Kashmir, it should first conduct the same in Sindh, Gilgit, and Balochistan.

Later, a discussion was held on Haifa war and a book by Ravi Kumar titled “Indian Heroism in Israel” and “Rashtra Raksha Mahakumbh were released at the hands of Defence Minister and Israeli envoy and other dignitaries.

The program was organised by Indo-Israel Friendship Forum.

Historical background: During the World War I, soldiers from Jodhpur, Mysore, and Hyderabad cavalry were dispatched to free Israel from Ottoman Empire. These soldiers won the battle of Haifa with just the swords and spears. This victory paved the way for independent Israel in future.

The brave Indian soldiers won this battle on September 23, 1918. To commemorate their victory the then Governor General of India built their memorial at Trimurthy Chowk here in 1924.

Since then Haifa Day is observed in memory of these soldiers on September 23 every year. Major Dalpat Singh who played a key role in this battle is remembered as ‘Hero of Haifa’. He was honoured with a ‘Military Cross’ for his bravery.