Art 370 was introduced at the behest of Pt Nehru: Indresh Kumar

Hapur (UP), Aug 23: The controversial Art 370 was introduced in the Constitution at the insistence of Pt Jawahar Lal Nehru, disclosed Indresh Kumar, a member of RSS Akhil Bharatiya Karyakari Mandal and Patron of Dharm-Sanskriti Sangama here recently.

Addressing the Bouddh Mahasammelan held at Chamber of Commerce here, Indresh Kumar said that when the constituent assembly was discussing clause by clause articles and ratifying them, Pt. Nehru pressurised the members to include the Art 370 which gave special status to J & K state.

He said that Dr. Babasaheb Ambedkar, who drafted the constitution, was deadly opposed to this article and did not sign the draft constitution. He even left the constituent assembly. He was against granting special status to J & K when their requirements would be taken care of by the Government of India but no at the cost of our territorial rights.

He further said that Pt Nehru assured the assembly that this article would be temporary and would phase out with the passage of time. But that did not happen and today the very article has become the root of all the ills in J & K, he added.

Indresh Kumar cited a number of instances from the life of Dr Babasaheb Ambedkar to highlight his nationalist attitude and approach. He appealed to the audience not to get divided in the name of religion, caste, language etc.

He said that those people are called 'sadhus' and saints who live for the welfare of the humanity. That's why people revere them. Those who practice discriminations based on castes, religion and language were sinners. They indulge in blasphemy.

Tracing the history of India's struggle for independence Indresh Kumar said that the country known for its riches was partitioned by some people. But people of India continued their struggle. The country became free of the foreign rule and then the constitution was drafted. For this purpose, providence selected Dr Babasaheb Ambdekar.

Dr Ambedkar tried his best to keep the country united. He drafted a constitution to fulfil his mission of achieving unity and integrity of the country.

Rajendra Agrawal, MP, said that Babasaheb treated everybody with equality and fraternity. He tried to end the discrimination in the society and brought unity. He appealed to the people to follow Babasaheb Ambedkar to check the downward slide of the social and moral values.

He was recently speaking to journalists at Dharmashala in Himachal Pradesh. 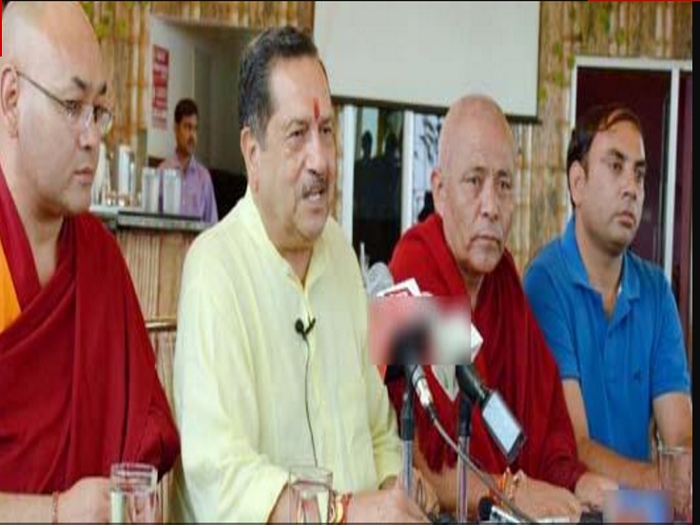 He said that Tibet was never a part of China, but China occupied it and forced its exploitative policies and created problems for the Tibetan people.

He said in spite of the freedom wave of the 20th century that liberated over 80 countries from the foreign yokes, Tibet continues to remain under illegal  Chinese occupation even now because of the imperialistic and expansionist policy of China.

He said that the venerable Dalai Lama too looks for freedom of Tibet. He demanded from China recognition for the exiled government of Tibet and resume dialogue with it.

He said that China should not destroy environment, life values and cultural heritage symbols in Tibet in the name of development. China should honour human values.

On the Kashmir issue he said that the Prime Minister Modi had already explained this in his I-Day speech from the ramparts of the Red Fort on Aug 15. The country that is supporting terrorism in one country should be treated as a terrorist country all over the world, he added.

Pakistan has not granted citizenship to those Muslims who migrated there from Bharat as yet. They are still treated as Mujahirs there, he said.

Indresh Kumar said that the Islam is in danger in Pakistan and human values are being denigrated. Pakistan is encouraging terrorism in Kashmir to divert the attention of the global community for its domestic failures and unrest within the country. The world will have to unite to save the human values, he added.

Dy Speaker of the Exiled Govt of Tibet Acharya Yashi Phunchok, members of Himalaya Parivar and RSS were present.