A grand program with strange admixtures 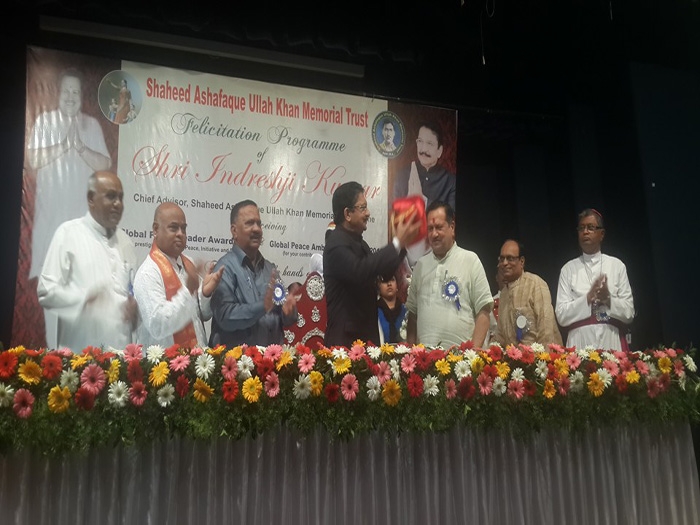 It could not have been grander and stranger than it was! A full hall in the most central location of Garware College where an organization called Muslim Rashtriya Manch (MRM) and the Shaheed Ashfaque Ullah Khan Memorial Trust, felicitated Indresh Kumar, a pracharak (full time worker) of RSS for over 40 years and an honourable member of Kendriya Karyakarini of RSS, at the hands of the Governor of Maharashtra Vidyasagar Rao.

The occasion was the two international awards bestowed upon Indresh Kumar by the World Alliance of Buddhist Leader, from Pinya Ponge, Thailand, who had never known Indresh Kumar, personally. The awards for his achievements were for a “Global Piece Leader Award 2016” and “Global Peace Ambassador Award 2016”.

What could have been stranger than the situation that Indresh Kumar has been accused by the UPA II government since 2009 as a conspirator for creating violence and disturbing peace in India? What could have been stranger that a number of ordinary Muslims have been sitting outside the chambers in which Indresh Kumar was being interrogated for long hours, reciting prayers incessantly for all these hours for his honourable discharge from these chambers? 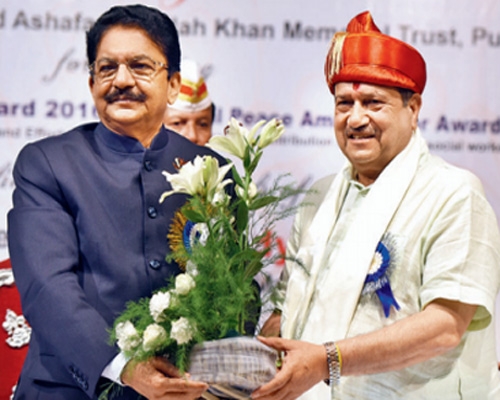 Indresh Kumar, has gone through multiple CBI, NIA and such other security organizations’ scrutiny yet none have dared to put his name on the charge sheets filed so far as an accused. I suppose the Buddhist Leaders were privy to this information yet came forward to bestow this award, which he received the hands of these leaders in Meerut a couple of months ago.

“Kuchh aarzoo nahee hai, hai aarzoo to yeh hai ki rakh de koi zara si khaak-e-watan kafan mein”. (I have no last wish, if at all it is, let someone put the sacred dust of my motherland in my coffin)

The Trust has been founded to facilitate the Muslim boys and girls to get the educational opportunities and go for higher learning, one by reaching the various government schemes to them and do everything else that needs to be done for them. The motto of the trust is no less strange! It says – “if needed we will eat only half a meal but we will educate our children; the education is to be able to live a much better life but this life will be dedicated to the land of Bharat, their Madare Vatan”!! (आधी रोटी खायेंगे, बच्चों को पढ़ाएंगे, तालीम जिंदगी के लिए, जिंदगी वतन के लिए)

Latif Magdum is the president of this trust. He has a long background of educational efforts, running such institutes and also looks after the responsibility on a national level. With Magdum, there are three doctors – Dr Zakir Hussain, Dr Shahid Akhtar, and Dr Tahir Hussain, Mohammad Salim Ashrafi, and Abbas Ali Bohra. Irfan Ali Peerjada, Mohammad Farooque Shaikh and Virag Pachpore were the organizers of the program. Their efforts resulted in an overflowing hall and people listening in rapt attention to what was to follow.

The strange admixture as I mentioned above was visible with guests of honour at the program being Right Reverend Thomas Dabre, the Bishop of Pune for over 25 years now. Dr S M Surendra Kumar, a typical traditional Andhra Brahmin, Founder of the Shri Datta Mahayog Peetam, Anantpur Andhra Pradesh who received his ‘deeksha’ from famous spiritual guru Narayankaka Dhekane.

Ishaq Birajdar, the second Guest of Honour is from Doordarshan Mumbai, the script writer of the Marathi serial titled “Ithe nandate Ekatmata”. His father was a Sanskrit Pandit and decades ago this name has been associated with scholars of Sanskrit. The program opened with a TiIawate Kuran in the sonorous voice and the classical rendition of it by a Maulana. 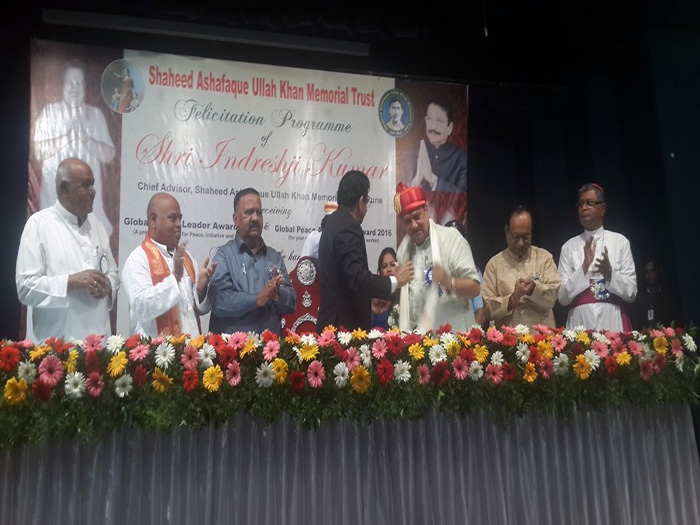 None of the speakers could escape the magic of the fact the award was given by World Alliance of Buddhist Leaders, consisting fifty one national level Buddhist Organizations, by gathering information from the internet about Indresh Kumar, which would consist of even the unsavoury but false accusations on Indresh Kumar and that the World Alliance of Buddhist Leaders could see through and choose him for his incessant 12-year work for emotional unity of the Muslim and the Hindu communities, while looking in all the major issues the Muslim Communities across the country are facing and for their solution. None could escape the fact that Muslims running the Shaheed Ashfaque Ullah Khan Memorial Trust took the first initiative to felicitate this Man.

To give a few examples –Indresh Kumar has motivated the Muslim Communities to welcome the birth of a girl child with a fanfare, to teach the girls to rise above, who has made the bold move to make Hindusthan ‘Talaq-Free’, organised a massive congregation of Muslim Cow protectors, arranged for Iftar parties inviting the ambassadors of Muslim Nations, Muslim professors, doctors, vice-chancellors, the Mullahs and MoulvIs appealing to them to work for peace and amity between the two societies of our country. To this last, all those who have been present for these Iftar parties have pledged their allegiance.

The amazing part and one is to hear it to believing, the equal and emphatic ease with which Ishaq Birajdar quoted from Koran as well as from the Vedas, the Upanishads, the Geeta and a dozen other references from the texts of both the religions. Right Reverand Thoams Dabre in an equally scintillating speech underlined and stood for who is a true Bharatiya, defining him / her as a person who works for the good of the country and its people as a whole. Dr Surendra Kumar SN blessed the audience and showered praises on Indresh Kumar for his missionary work.

Each one emphasized the unity of God, each appreciated the variety of the paths people chose to reach the ultimate unity. Each one clearly expressed, especially Birajdar, that we are one race, we have one tradition and our ancestors are the same, with a number of examples from Indonesia and their pride in their traditions.

Indresh Kumar made several points – that, the eternal bliss is at the feet of our mother, and the land which has sustained us. He quoted Rasool Sahab saying that when he felt lonely or dejected he would receive his sukoon, his relieving happiness from Hind. He emphasized the save the girl child, educate the girl campaign, the Talaq-Mukta Bharat, of organizing Raksha Bandhan as a festival not just for the brother and the sister, but as a uniting thread between the nature and the man, the man and his teacher, the society which stands by its soldiers who protect them under the most adverse conditions, giving it a multidimensional paradigm. 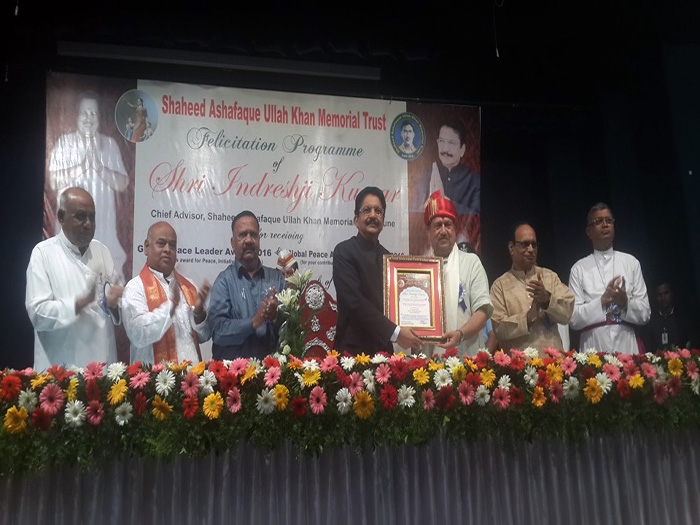 He will lead the Muslim Rashtriya Manch holding such a program in Talkatora Stadium in New Delhi on 17th August 2016 as an International Raksha Bandhan Divas. This, for the readers’ information, has been held in various cities where the Muslim women have tied the Rakhi to Indresh Kumar and called him a brother.

The crowning surprise, however, came from the Governor Vidyasagar Rao who among other things quoted from a letter written by Swami Vivekananda to a Muslim Friend of his Sarfaraz Hussain, saying that the best attempt after the Hindu effort for equality has been made by Islam and Islam only. The Honorable Governor mentioned that he was warned by the babus about Indresh Kumar being accused of violence and charged for it, to which the Governor did not pay heed and said he would attend for the sheer magnificence of the occasion which belies all else.

This strange function that started with Tilawate Koran ended with the National Anthem sung by all those present, with the Governor. The truth sometimes really is stranger than fiction!!!